The Utility bag is our ultimate snowboard transportation option. Whether it's for your dream trip to Japan or your weekly pilgrimage to the local hills the Utility will keep your gear protected.

The Utility features enough space for multiple boards and all your other gear so you can ditch the suitcase. But just in case you don't we've included our stow-able cargo strap system that allows you to attach almost any wheeled case or duffle bag to the outside of the board bag. Simply open the zipper on the bottom of the bag, pull out the straps, cross them over your bag and hook them through the attachment loops on the top of the board bag. Bags with an extendible handle can also be attached via the oversize velcro handle on the end of the bag for more secure rolling.

The Utility is also equipped with a host of other great features including 2 lightweight packing cells that can it boots with ease, secure board straps, side carry handle, top lugging handles and external compression straps.

My first snowboard bag and I wanted something that not only was functional, but also high quality. The bag is great compared to a few other brands I tried out at a store before settling with this one. Was able to fit two boards and equipment into it without much issue. No regrets, however only after my first trip, half of the lettering/logo on the outside of the bag already peeled off? Doesn't affect the bag itself, but sucks that it reads "EAR" with the letters that are left on it.

Amazing design and quality I back these guys

Was very impressed when I unboxed this beauty of a bag. Everything looks to be of high quality and I could even fit my 164.5cm board inside. Definitely a very professional looking unit that puts out the vibe you’re serious about your riding. Now only need this damn Covid Pandemic to end so I can book an international trip to use and show off this purchase. Very happy I went with this bag rather than cheaper alternatives as the value is outstanding

Finally got my bag and could not be more excited to get to the slopes. I was nervous as my board is a bit larger (162W) than the bag's intended size, but it fit with a bit of room to spare. Enough room for all your gear and then some. 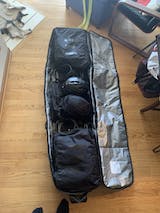 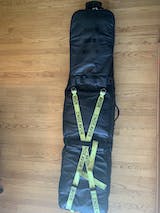 Quick to answer online, looks great and is very practical. It stores well!